The Lada Niva 4x4 has been available in (his country in rhd form since 19&3. but its rather basic appearance effectively limited it to farming and construction applications. The Knightsbridge off-roader on a limited budget invariably opted for the Suzuki jeep, but with the Cossack Cabrio. Lada Cars is hoping that things might change. 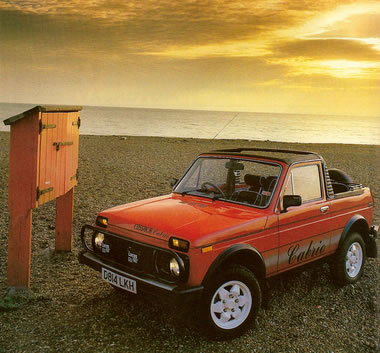 The Cossack pack includes alloy wheels, cloth scats and a host of other cosmetic extras which, with the Cabrio conversion, adds £2300 to the Niva's £5695 price tag. The Niva it self is a slightly different animal nowadays, and since the last time we featured one there has been a number of changes including the addition of a fifth gear.

The basic layout of the Lada Niva has not changed since its inception, but despite its rather utilitarian appearance the chassis and drivelinc arc actually quite sophisticated. Permanent four-wheel drive with a lockable centre differential and two-speed transfer box reads like a Range Rover spec sheet. and the Niva is also blessed with coil springing all round and independent front suspension — in fact no other off-roader combines all these features.

Powering the Niva is Lada's own overhead-camshaft 1600 four-cylinder engine. This is virtually unchanged since its introduction and is still equipped with contact breaker ignition, although ils eight valves arc to be found in an alloy cylinder head. A twin-choke downdraught carb allows it to develop 78bhp at 5400rpm, with maximum torque of 881b ft produced at 3000rpm. 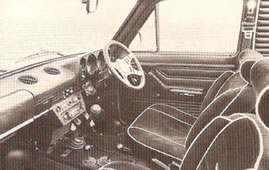 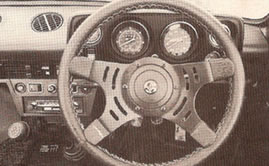 Behind the new wheel the instrumentalion is clear and extensive

The Lada-designed gearbox gained its fifth gear at the end of 1985. although it obviously took the interior stylists by surprise — the gearchange layout label on the transmission tunnel on our test vehicle had fifth gear drawn in with a Biro. The new ratio gives 19.2mph per 1000rpm and is effectively an overdrive top to quieten things down on the motorway.

Drive to all four wheels is through the two-speed transfer 'box and centre differential, low ratio being selected by a lever alongside the main gear lever. Another small lever on the transmission tunnel engages the manual centre diff lock, and this is indicated by an amber light on the dash.

At the front, double wishbone suspension with coil springing, telescopic dampers and an anti-roll bar help to keep the wheels under control, while the live rear axle is again coil-sprung and located by a Panhard rod and four longitudinal radius arms. Manual worm and roller steering is fitted to all Nivas. and no power-assisted option is available.

Standard Nivas sit on 5Jxl6inch pressed steel wheels shod with 175'82 Volzhsk tyres, but on Cossack mod els these are replaced with whitc-paintcd aluminium alloy 6Jxl5 wheels with Michelin M&S 185R 15s. No changes are made to the final drive or gearbox ratios for the different wheel sizes, but in fact because the Michelins are not a low profile design the rolling radii arc very similar.

The Cossack package has been on offer from Lada dealers since the middle of last year, and as well as the alloy wheels it includes plastic wheel arch extensions, front and rear bull bars (the rear including a spare wheel carrier and wheel cover because the alloy wheel won't fit in the usual place under the bonnet), corduroy padded scat covers and full carpeting.

The steering wheel, arguably the least pleasant aspect of the standard Niva, is replaced by a smaller four-spoke leather-rimmed number, and the door mirrors are changed for matt black items. A pair of driving lamps and a set of body stripes complete the list. and the pack is of course available separately from the soft top conversion.

Equally, you can have a Cabrio without the Cossack if you want, the conversion being carried out on new Niva's to order by Top Hat Conversions. What it docs is cut the rear bodywork away above the line of the rear side windows and behind the В pillars, welding two braces across the rear wings under the parcel shelf to restore the structural rigidity. The standard tailgate is cut down and re-hinged. and the В posts arc joined across the top by a roll bar.

The hood itself is of black vinyl, with a clear rear window panel, and secured by press studs everywhere except across the top of the windscreen. There a steel reinforcing strip fits in a slot in the top of the screen surround, and the hood is supported by two hinged loops behind the roll bar — these have an over-centre device on each side to tension the hood. 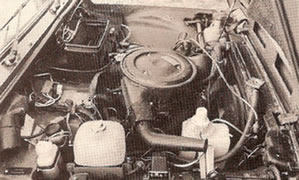 From the driver's point of view the Cossack is the same 3s an ordinary Niva. that is to say basic. A trip speedo and rev counter live in a console, the trip reset being via a knob with which you have to wind back all the digits. Rocker switches control the two speed fan, headlights and fog lamps, while gauges for oil pressure, fuel contents and water temperature arc standard — on our test car the oil pressure would fall to zero on tickover with a warm engine. 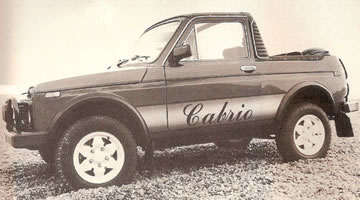 Three stalks on the steering column control indicators and headlamp dip on the left, single speed plus intermittent wipers on the right. A separate button works the headlamp wash wipe which is standard on all Nivas. None of the electrics seems to be routed through the ignition switch though, so it is perfectly possible to park and lock the car with the wipers and fan running as well as the lights on if you are in a hurry.

The Lada engine starts easily enough from cold provided full manual choke is used, but it takes a long time to warm upand run cleanly. The heater doesn't work until the engine has been running for five minutes or so. and even then there is only a pair of swivelling louvred vents on top of the dash that have to double as demist and face level outlets — foot-level heating is taken care of by opening a large flap under the console.

Underneath the cord upholstery of the Cossack, the front scats are the same items Niva's have always had. with slide and three position backrest adjustment only. They look like refugees from a 1965 Ford Anglia and unfortunately feel just as bad. The problem is the scats bend backwards at the top and provide no support above the small of the back.

There isn't enough rearward movement for six-foot plus drivers, and with the scats well back legroom for the rear passengers is severely restricted. The front scat passengers have a reasonable amount of headroom. but. in the rear, heads tend to touch one of the hoops that support the soft top.

The cabrio conversion means that luggage space is at a premium with four passengers aboard. The pared shelf is fixed in place to provide a rather small boot, and access to this can be a real pain. To open the boot, the spare wheel earner has to be swung out of the way and the press studs for the hood disconncctcd. The cut-down boot opens with the standard handle, but the original gas strut is too strong and needs a hefty shove to dose the boot again. Then the hood has to be reattached, but it needs the support hoops releasing to take the tension off the studs.

As far as removing (he hood is concerned, it can be taken down in two minutes flat. When folded, it lives on the parcel shelf under a vinyl cover that attaches to the press studs. Putting it up is rather more fiddly though, with plenty of Velero to get snagged and lots of press studs that never quite seem to line up first time.

To put it kindly, road use doesn't show the Lada in its best light. The engine is rough and lacking in mid-range power, although the gear-change is reasonably precise and the clutch light enough even though there is no space for the driver's left foot.

The five-speed Niva is hopelessly overgeared in top — a change down to fourth is essential to maintain progress on the slightest motorway upgrade. A top speed of 78mph is achieved in fourth, and an indicated 70mph (66mph true) is the maximum practical cruising speed. This equates to 4000rpm. but there is very little engine noise at this speed because wind noise, tyre noise and transmission whine dominate while the soft top tends to flap against the support hoops to add to the general din.

Around town the Niva fares rather better. The ride is good over small and large irregularities, and the front anti-roll bar docs a good job of controlling the cornering roll induced by the high centre of gravity and long travel suspension.

The steering is another matter though. At 3.3 turns lock to lock the gearing would not be out of place on a sports car. but in manual form on the Niva it is simply far too heavy. The brakes too could do with improvement. Even though discs are fitted at the front, they have trouble coping with almost a ton and a half of car. The pedal feels spongy and a lot of pressure is required to stop quickly, and in our fade tests over four times the pedal pressure was needed towards the end of the test.

On the road, the full Cossack Cabrio treatment on a Niva will set you back just under £8000. while a soft top Suzuki jeep can be had for under £6000. Both vehicles arc uncomfortable motorway cruisers, and around town the Niva's steering and brakes need far too much effort. The Japanese offering is a much smaller vehicle though, certainly not capable of seating four adults in comfort for any length of time. The Lada has the benefit of five speeds, permanent four-wheel drive and a much better ride, but the Suzuki is streets ahead in terms of fit and finish. Although it'sof little interest to the Chelsea farmer, both vehicles are very capable off-roaders. 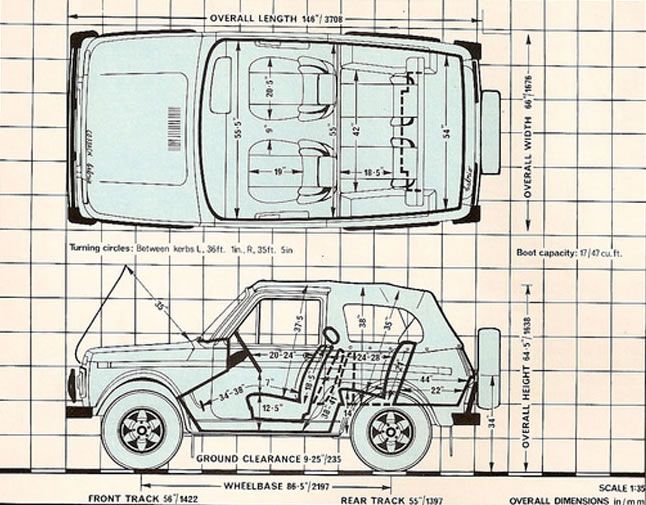 SOLD IN THE UK BY: